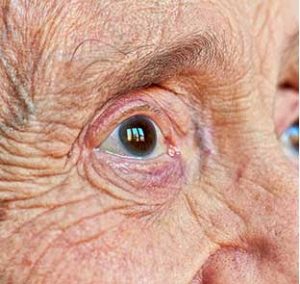 Cataracts are blockages in the path of light passing through the human lens.  The human lens is a clear and colorless structure, which focuses light on the back of the eye.  This structure can change with age, become opaque, whitish or have anterior or posterior surface changes.  The most common cause for cataracts is aging and ultraviolet light exposure.

A study comparing watermen on the Chesapeake Bay people who worked in the canneries found that the individuals who worked outside on the water developed cataracts more frequently than those who worked in the canneries.  The only variable between the two groups was the length of time exposed to light.  In just a short period, it became obvious that protection from ultraviolet light, which is most intense at the surface of the water, would be helpful in limiting the incidence of cataracts.  That is why the guidelines for the use of sunglasses have changed so dramatically over the years.

Cataracts can develop from many causes.  They can be genetic and occur regularly in some families or congenital, present at birth due to a mother’s fever or illness during pregnancy.  Diabetes, alcohol and tobacco are often associated with the early incidence of cataracts.  Additionally, general health, the use of vitamins, maintaining a fit and healthy lifestyle probably can also limit the progression of cataracts.

Patients who have cataracts often experience blurry vision and poorly discriminate color.  The lens of our eye actually yellows during our lifetime. Color is distorted even though vision may be 20/20. This discrepancy in color perception may be an indication for cataract surgery, especially if an individual’s livelihood depends on it.  Removal of the human lens and replacing it with an appropriate implant can provide normal transmission of light.  It is not uncommon for post cataract patients to report that someone changed the color of their house or clothes.  They cannot believe how bright the colors are in contrast to what they previously perceived.

When you see someone with blue hair it is often because the individual is suffering from yellowing of the human lens.  A patient may visit the hairdresser to have their hair dyed as they say it looks yellow to them.  The only way the hairdresser can get this individual to be comfortable with their appearance is by making the hair blue.  With the addition of blue, the individual sees a more pleasing gray color through their yellow lenses.  My advice for the elderly is to rely on the hairdresser’s color recommendation.

You may notice that as people get older, they may have a propensity toward using green.  As the human lens ages,  yellows and greens look tan.  Patients may begin to wear bright greens more often, thinking they are wearing a subdued tan color.  Once again, it would be wise to seek advice on color from younger eyes.

Medicare patients receive cataract surgery more frequently than any other procedure in the United States.  This procedure is quick and rather easy from the patient’s standpoint but demands a skilled surgeon.  Cataract removal also removes the eyes ability to focus.  Standard surgery replaces the cataractous human lens with a plastic silicone or acrylic implant that focuses the light with new clarity.  But when a rigid implant is placed, the individual is able to better focus for distance, but not up close.   There are multifocal implants which can focus at distance and near, allowing for a fair degree of clarity.  Individuals with this implant have noted halos at night and some loss of contrast sensitivity.

There is yet another implant which actually moves forward and backward focusing light much as the human lens does.  It allows patients to see more clearly far and near than those with a straight monofocal or nonmoving implant.

This technology changes regularly.  It would be wise to get additional opinions, seeking doctors who do high volumes of surgery and are on the forefront of this particular problem.  Careful selection of your surgeon is imperative to having an excellent outcome.